Learn more about the individuals dedicated to helping Transform Hawaii Government advocate for an efficient, responsive, transparent and equitable government. 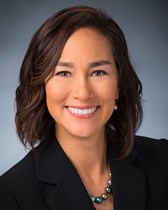 Prior to joining THG, Christine was executive director of the Hawaii Health Information Exchange (HHIE), which she joined as a board member before transitioning to leading the organization in 2010. At HHIE, Christine devoted much of her time to transforming health care and the way it is delivered. HHIE was designated by the State of Hawaii to plan and develop a statewide health information exchange. Today, most of Hawaii’s major health-care organizations and hundreds of Hawaii physicians are connected to HHIE.

Christine is an executive committee member of the TRUE Initiative and serves as a member of the State of Hawaii’s Information Technology Steering Committee. She is also currently an Omidyar Fellow.

Christine is a graduate of Santa Clara University in California, where she earned a Bachelor of Science degree in marketing and Japanese. She also holds a Japan-focused Executive Master of Business Administration degree from the University of Hawaii at Manoa. In 2019, Christine achieved one of her lifelong dreams, becoming a kumu hula.

Board Secretary and Treasurer, The Omidyar Group, Hawaii

“I am honored to serve on THG’s board and believe in its mission to be a consistent voice for an effective and transparent government, which enables the people of Hawaii to thrive.”

Randy Ching leads The Omidyar Group’s efforts in Hawaii, which span several initiatives within the government, civic and social sectors. In his role, Randy collaborates with organizations and teams to identify and pursue opportunities benefitting the people of Hawaii. Randy’s curiosity and passion for exploration, discovery and practical application distinguish his approach and help foster creativity and collaboration with colleagues and partners.

For nearly 15 years, Randy has held founding and leadership roles across multiple organizations in The Omidyar Group, most recently partnering with Pierre Omidyar and Alex Poon to create UP2398, a venture firm focused on taking a hands-on approach with seed-stage founders. Prior to UP2398, he and Omidyar co-founded Honolulu Civil Beat, an online investigative news outlet dedicated to producing journalism with a purpose. Randy also served as chief operating officer of First Look Media, an independent media company empowering the most ambitious voices in journalism, arts and entertainment. He currently serves on boards related to UP2398’s investments as well as various boards for The Omidyar Group.

Prior to his work with The Omidyar Group, Randy spent nearly eight years with eBay, beginning as a product manager in 1999. He later held several senior-level positions at eBay, culminating with his tenure as vice president and general manager of global classifieds. Before joining eBay, Randy sharpened his business and legal skills as an associate with two San Francisco-based law firms.

“I am happy to be a part of THG’s mission to promote a tech-savvy government that provides services to the people of Hawaii, when and where needed.”

Robert joined First Hawaiian Bank in 1996 and has more than 30 years of financial industry experience working for banks in New York and Hawaii. He currently serves as a board of directors member for Pacific Guardian Life, the Hawaii Bankers Association, the Hawaii Business Roundtable, the Hawaii Community Foundation and the Maryknoll Foundation, and is chairman of the Hawaii Medical Service Association, the independent licensee of the Blue Cross and Blue Shield Association in Hawaii.

Robert served in the U.S. Navy prior to earning a bachelor’s degree in applied mathematics from the University of California, Los Angeles, and a Master of Business Administration degree from Cornell University in New York. 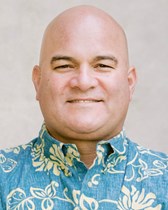 “As a founding member of the THG board, I am proud of THG’s vision for a delivery-driven government that enables people, communities and businesses to thrive.  The people of Hawaii should be able to access government services when and where needed on all islands.”

Micah A. Kane is the chief executive officer and president of the Hawaii Community Foundation, the state’s largest and oldest foundation working with individuals, families, foundations, government agencies and organizations to transform lives and improve our communities. Prior to becoming the third chief executive officer and president in the foundation’s 105-year history in July 2017, he served as its president and chief operating officer, responsible for leading the executive team and day-to-day operations. He also served on the Hawaii Community Foundation board of governors for eight years before joining the foundation.

Micah’s previous work experience includes serving as chief operating officer of Pacific Links International, where he was responsible for operations and acquisitions of all its residential and resort development in Hawaii. He was also chairman of the Hawaiian Homes Commission and Department of Hawaiian Home Lands, a 200,000-acre native Hawaiian land trust. Micah recently served as a trustee for Kamehameha Schools and as chairman of its board of trustees for two terms. He also served as the government affairs liaison for the Building Industry Association of Hawaii.

Micah was raised in Hawaii, is a graduate of Kamehameha Schools and Menlo College in California, and received his Master of Business Administration degree from the Shidler College of Business at the University of Hawaii at Manoa.

Over the years, Micah has been recognized with multiple awards, including the 2019 University of Hawaii at Manoa Shidler College of Business Hall of Honor Award, the Public Relations Society of America Hawaii Chapter’s Koa Anvil Award of Excellence, the Salvation Army Partners in Community Service Award, the Hawaiian Leader of the Year Award from the Koolaupoko Hawaiian Civic Club, the Hawaii Institute for Public Affairs Hooulu Leadership Award for Government, the Environmental Council Award, The Aloha United Way Spirit of the Year Award, and the Building Industry Association of Hawaii’s Housing Advocate of the Year Award. He is also a Menlo College Hall of Fame inductee for football. In December 2020, Hawaii Business magazine recognized Micah as its CEO of the Year.

Micah currently serves on the corporate board of directors of Hawaiian Electric Industries. 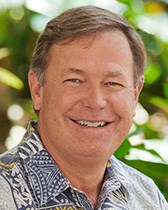 “THG is a civic advocate for using technology in government more wisely to better serve the people of Hawaii.”

Mike Mohr leads The Omidyar Group’s efforts in Hawaii, which span several initiatives within the government, civic and social sectors. In his role, Mike collaborates with organizations and teams to identify and pursue opportunities benefiting the people of Hawaii.

Mike brings more than 30 years of diverse financial and managerial experience to the THG board of directors. The founder and chairman of California-based Comprehensive Financial Management, he has also served for many years as a close advisor to Pierre and Pam Omidyar. Mike serves as director for several charitable organizations and commercial ventures, and has patiently and persistently helped THG achieve progress since its inception.

“It has been a privilege to serve as a founding member of the THG board to support the state and its employees’ journey towards IT transformation.”

Randy Perreira is executive director of the Hawaii Government Employees Association (HGEA), AFSCME Local 152, AFL-CIO (American Federation of Labor and Congress of Industrial Organizations), Hawaii’s largest union with more than 39,000 members statewide. Randy was appointed to lead HGEA in 2008 and is the fifth executive director in its history. He is also a second-generation HGEA leader. His father, Herbert Perreira, worked for HGEA for more than 20 years.

Randy was elected president of the Hawaii State AFL-CIO in 2005 and remains its president. He has also served as an AFSCME International vice president since his election to the position in 2008. Randy is dedicated to not only advancing the goals of Hawaii’s government workers, but those of the community at large. He understands the right to organize is a fundamental tenet of a strong, working middle class and exemplified this as he fought for workers’ rights throughout the COVID-19 pandemic.

Randy began his career with HGEA in 1983 as a union agent in its Honolulu office. He was promoted to field services officer in 1990 and deputy executive director in 1999. He also currently serves on the boards of several organizations, including the Aloha United Way, Island Energy Services, Hawaii Medical Services Association, Hawaiian Tax-Free Trust and Transform Hawaii Government. The numerous awards Randy has been honored with include the Hawaii Institute for Public Affairs Ho'oulu Leadership Award, the Aloha United Way Spirit of Aloha Award, and the 2012 Outstanding Leadership Award from his alma mater, St. Joseph High School. He holds a bachelor’s degree in business administration (management) from the University of Notre Dame in Indiana and a Master of Business Administration degree in personnel administration from Michigan State University. 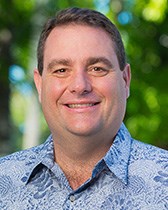 “I am happy to support THGʻs vision for a delivery-driven government that enables people, communities and businesses to thrive.”

Ray holds a bachelor’s degree in business administration from Hawaii Pacific University and a Master of Business Administration degree from the University of Alaska at Fairbanks. He currently serves as chairman of the national arm of the American Heart Association and is a member of the American College of Healthcare Executives. Ray also serves on several local boards of directors, including Bank of Hawaii Corporation, Island Holdings Inc., Island Insurance Co. Ltd., Tradewind Capital Group, Blood Bank of Hawaii and the Hawaii Executive Collaborative.