“With the publication of Honolulu Dashboard, residents now have an easy way to track our progress in key priority areas. We take accountability seriously, and the dashboard helps to ensure that we track our progress and reach our goals.” — Mayor Kirk Caldwell

In February 2019, the City and County of Honolulu launched the Honolulu Dashboard, an online resource to review progress on key city services and issues. A beta test version had been online since December 2018, allowing city staff to offer input in advance of launch.

Honolulu Dashboard is the result of the city’s collaboration with What Works Cities, a Bloomberg Philanthropies initiative that helps cities use data and evidence to tackle their most pressing challenges and improve residents’ lives. In January 2018, Mayor Caldwell announced Honolulu’s selection as one of the initial 100 cities to receive technical assistance from the initiative’s expert partners.

Homelessness is one of the issues tracked on the Honolulu Dashboard.
http://www.honolulu.gov/dashboard

Honolulu worked with What Works Cities partner the Center for Government Excellence (GovEx) at Johns Hopkins University to improve practices in data governance. The initial effort focused on creating dashboards to report key performance indicators around homelessness and housing, and was expanded to include road and park improvements. Of the 13 dashboards now published, all but one include explicit targets or goals that the city is measuring progress against. These are inaugural targets for some service and issue areas, demonstrating the city’s increasing capacity and commitment to use data to track performance and deepen accountability. 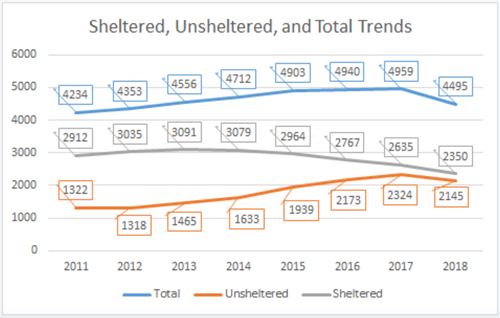 Charted are the sheltered, unsheltered, and total homeless population counts from 2011-2018.
http://www.honolulu.gov/dashboard

The city’s Department of Information Technology developed the dashboard in-house, saving taxpayer funds and providing maximum flexibility in program design and execution. While the front face of Honolulu Dashboard has a common feel and interface, the detail section of each individual dashboard is designed for flexibility to enable the use of graphs, pictures, hyperlinks, and imbedded programs, such as “story maps” and GIS data. The menu at the top of the page enables quick and easy navigation to the viewer’s area of interest, and allows for easy expansion of subject areas.

The launch of these dashboards is just the beginning, according to the city. Over the next year, Honolulu intends to add more dashboards, driven primarily by community interest and the availability of accurate data. In addition, website analytics will assist the team in evaluating the utility of the dashboard, helping to drive further refinements.